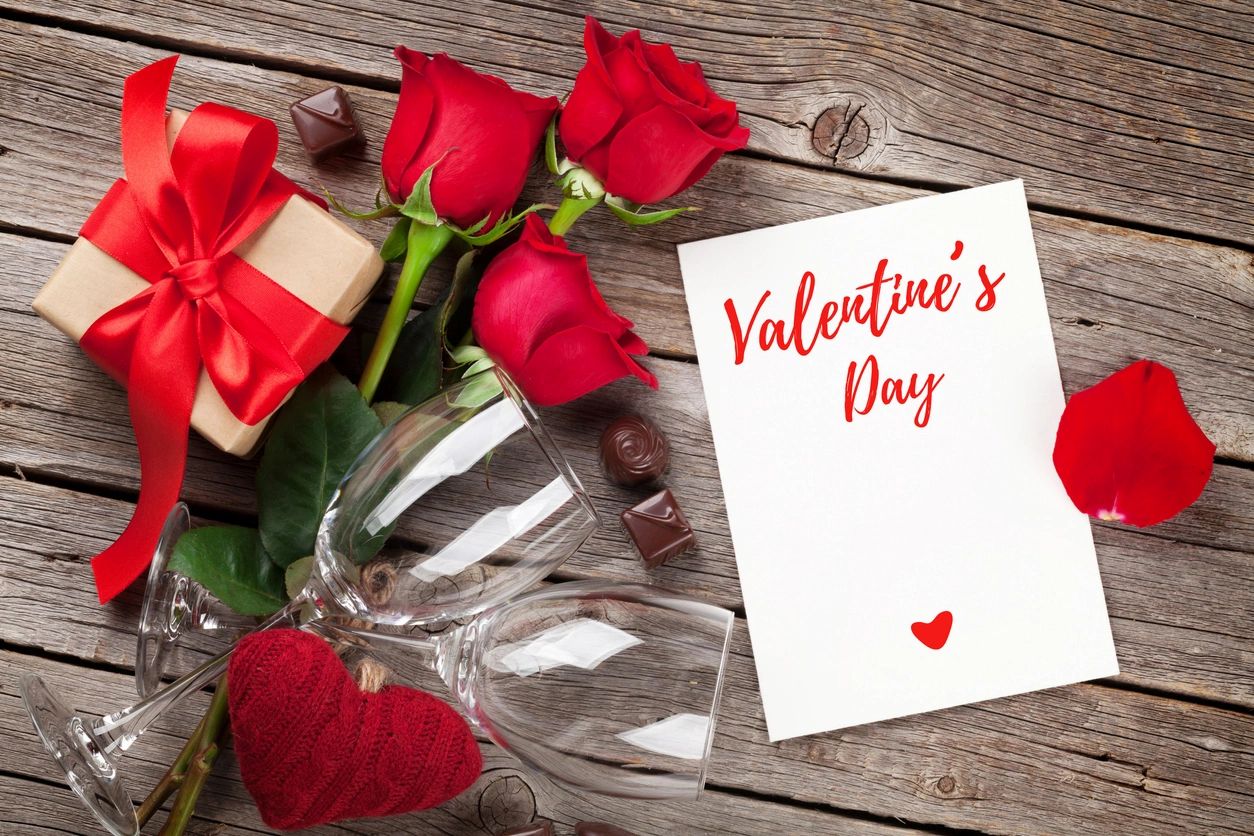 A special day to say "I Love You!"

The feast of St. Valentine... a celebration of love and affection!

LOVE AND ROMANCE ARE IN THE AIR!

WAYS TO SAY "i LOVE YOU"

Give a thoughtful gift

Hug and Hold each other

Smile and laugh together

Consider lover's desires ahead of your own

Tell children they are loved, often!

Be receptive when they want a hug

Praise accomplishments, no matter how small

Play games with them

Give them your time

Help them to build confidence

Tell them how special they are to you

Let them help you

Plan time for groups and individuals

Offer to help them

Champagne/Wine or other cocktail choice

Make your own Valentines

Send Valentines to others

Cook or Bake together

Have Breakfast in Bed

Prepare Special Dinner at Home or Dine Out

Go to an amusement park

Go for a Walk

Go out of town

Decorate with Red and Sparkly things!

Turn off the phone

Who Celebrates Valentine's Day and Why

Celebrating the Feast of St. Valentine  on February 14th has become an annual tradition for many!  It is not a public holiday, but it has become tradition to embrace the day by  sending cards,  giving flowers and candy to loved ones, attending church, and planning a time of romance.  These  are but a few of the ways to recognize those special people in our life!  Love takes on so many forms!  We tend to think of Romance as it relates to love, and thereby consider Valentine's Day an overwhelmingly romantic "holiday".  However, extending that expression of love to family and friends is not only appropriate, but welcomed in all walks of life!

Who was this person, St. Valentine?  There are many accounts of this patron saint, and the real truth remains a mystery.  However, there are some interesting versions!  One legend is that Valentine was a priest in Rome during the third century.  At that time, the Emperor decided that single men made better soldiers than those who had families to support, so he outlawed marriage for young men. Valentine secretly continued to perform marriages for young lovers, and when discovered, he was killed.  Another interesting story was that during his imprisonment, Valentine fell in love with the jailor's daughter, and sent her a letter before his death that was signed, "From your Valentine".

In the middle ages,  it was believed that bird mating season began on February 14th in France and England.  Well of course that makes sense to declare it a time of romance!

Cupid's arrow will strike unsuspecting mortals!  In Greek mythology, this mischievous child was an immortal God named Eros  , who used golden arrows to play with the emotions of men!  I suppose this would explain "love at first sight"!

The heart shape has become a symbol of love and used extensively in honor or expression of love, especially at Valentine's Day!  It's symbolic origins are varied from using animal hearts as sacrifices, to believing that the heart is where God wrote his list of commands, to the shape of a giant fennel plant which was used as birth control, to the theory that the heart holds all human passions, and the heart shape was based on a medical drawing of the chambers in the heart.  It is also true that the heart reacts to passionate feelings by beating a bit faster, pumping blood to vital organs and is at the center of our physical being.  No matter what the origin, the heart shape has become a symbol of love!  A broken heart is symbolic in emotions having another type of reaction in our bodies, affecting all of our organs.

A note on expressing Love.  This thing called love is not just a word a person can use say to cover the bases with someone about how they feel.  It's just a  word that can mean like,  if not accompanied by action. Saying "I love you" is a start, but we also love candy, our pets, a beautiful day.  The difference is to then follow it up with how you are going to love.  To truly love someone is to give them actions and things that let that person know that you have spent time considering their happiness, that they are cherished, that they are admired. To love is to put another person's needs and desires above your own.  Love is that which you give away, not something that you want and seek for yourself.  Feeling "in love" with another person is not love.  It is the desire to have love with that person, but unrequited, it is only selfish desire.  Love may or may not grow where you have planted the seeds by letting someone know how you feel.  Recognize that love is something that is mutual and shared.  Loving something/someone is quite different than being "in love", which takes two.

IT DOES NOT ENVY

IT DOES NOT BOAST

IT IS NOT RUDE

IT IS NOT SELF-SEEKING

IT IS NOT EASILY ANGERED

IT KEEPS NO RECORD OF WRONGS

LOVE DOES NOT DELIGHT IN EVIL

BUT REJOICES WITH THE TRUTH